This is NJBA A+U’s contribution to the ‘dugnad’, (a voluntary input for the purposes of debate) organised by Markus Richter of the 0047 Gallery in Oslo.  Tasked with examining the complex, its buildings and spaces the proposal sought to invoke a memory of why the place has been abandoned. 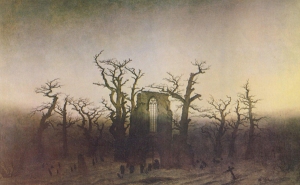 It is hard to look at Høyblokka without thinking of Caspar David Friedrich’s “The Abbey in the Oakwood”.  What had been a vibrant monastery had firstly been dissolved then fell into ruin before been recycled for defensive positions.  In the painting the ruin is shrouded in darkness as mourners arrive to a funeral.  The trees like the ruin are also pruned, their branches amputated.  The melancholy of the painting is a suitable echo of the sad events in Oslo and Utoya.

The blackened oaks are mirrored in the tall trees standing in front of Høyblokka.  It seems appropriate that two hundred years separate the creation of the painting from the events in Norway.

The enduring image of the events in Utoya was the white sheets that covered the victims of the atrocity.  The organic distribution of the sheets along the waterfront produced and enduring almost artistic image of innocence and loss.

While deliberations will take time to define the future of Høyblokka this is a proposal to honour the fallen to compliment the proposed memorial on Utoya to loss.  71 internally illuminated crumpled sheets are placed on 71 biers raising them above the pedestrian level.  As frames they take up variations in the landscape creating a cloud like cover to the remaining urban space of the Høyblokka complex.

0047 will present a wide range of entries in the exhibition Høy­blokka revisited, which opens on March, 27th; a selection of the entries will subsequently be published in Arkitektur N.  The debate should raise important questions about the nature of urban ruins.