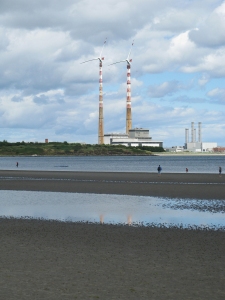 The towers at Poolbeg may no longer be in use and though the ESB has shelved plans for their demolition there remains a gap that requires resolution.  Other proposals, from the fanciful to the practical have been made to which we are adding the obvious.  As both a symbol of a new era in abundant energy from non traditional resources (those other than the burning of coal, gas, oil or nuclear fuels) the ESB could re-purpose the towers to wind power.

While the elements require some strengthening (internal steel lattice) they could be the masts to two elegant windmills.  This would be a potent symbol for an energy independent future right at the gateway to Dublin and Ireland.  Moreover this would be a wonderful opportunity to provide a test bed for newer blade technologies.  Glinting in the sun and riding high on the winds they would be a welcome addition to the  windsurfers on Bull Island at the heart of the designated UNESCO Biosphere. 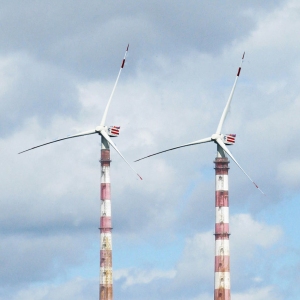